Agreement A in R

Ordered rating scales are a common format in surveys, and often we are interested in the extent to which responses are in agreement (whether there is consensus, whether there is concentration among the responses, or by contrast whether there is dispersion or polarization). Standard deviations are commonly considered an inappropriate measure in this situation. Van der Eijk's measure of agreement A disaggregates frequency distributions into component parts called layers. At the level of these layers, agreement can easily be determined, and the measure of agreement provides the weighted average.

We can use the example provided by van der Eijk (p.331) to illustrate the use of layers.

Using the weighted average, we get a level of agreement of 0.61. The outlined procedure can be applied to any ordered frequency distribution. 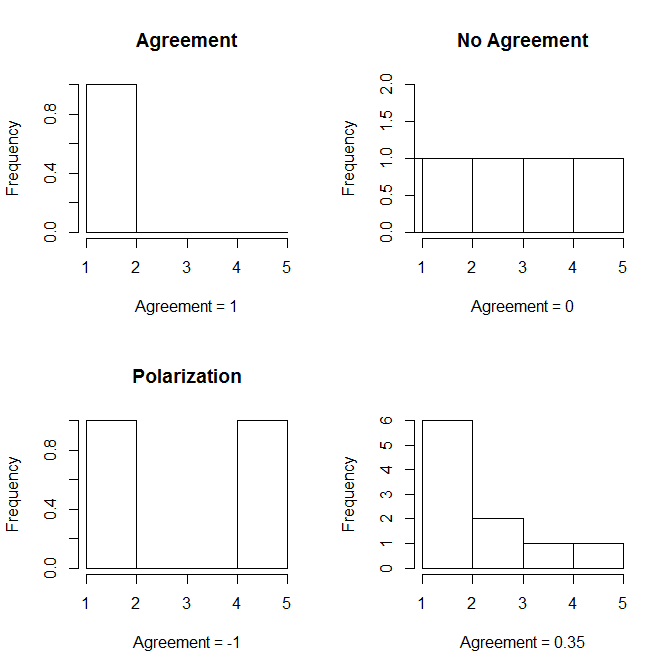 For further documentation, please refer to the original contribution by van der Eijk (2001), and refer to the package help files and vignette. You may also consider the other measures of agreement or consensus available in the package, such as Leik's measure of ordinal dispersion (Leik), Tatsle and Wierman (consensus), Blair and Lacy (dsquared, lsquared, BlairLacy), Kvalseth (Kvalseth), Berry and Mielke's IOV (BerryMielke), or Garcia-Montalvo and Reynal-Querol (MRQ). A measure of polarization based on the van der Eijk measure is also provided.